Claude Monet was one of a group of painters who created the style of art called 'Impressionism'. The name 'Impressionism' was a sarcastic tag attached to one of his paintings, 'Impression: Sunrise' (1873) in a review by Louis Leroy in the satirical magazine 'Le Charivari' (25th April 1874).

Impressionist painters tried to capture the quality of light and atmosphere of a subject under particular lighting or weather conditions. The Impressionist’s painting technique allowed artists to create colours and tones that had more natural appearance than anything achieved by traditional methods of painting.

The Impressionists rejected the old idea that the shadow of an object was made up from the colour of the object with some brown or black added. They avoided the use of brown and black. The range of colours Monet used was drawn from the spectrum. He did not mix up his colours before he painted them, but broke them down into their separate hues and then painted them in small strokes of pure colour next to each other. For example, if he was painting a green object he would paint strokes of yellow and blue together which, on being viewed from a distance, would form a green in the eye of the spectator. Another technique he used was to tint his shadows with complementary (opposite) colours to give them more vitality. For example, in his painting of 'Rouen Cathedral in Full Sunlight' he creates the brown shadows of the building by painting strokes of yellow and red to make orange and then darkens them with spots of blue. All this is done with strokes of pure unmixed colours which blend in the eye of the viewer.

Impressionist painting also had its disadvantages. It was difficult to paint in a detailed manner as the paint was applied in thick brushstrokes and the artist had to work very quickly to capture the changing effects of the light or weather conditions.

If we were to look at a photograph of Rouen Cathedral we would see that it had very detailed Gothic facade. In his painting, Monet had to simplify this to try to capture the hazy atmosphere created by the strong sunlight. To achieve the luminous effects of sunlight, he mixed his colours with white rather than using them straight from the tube. The surface quality of this work is a heavy, but evenly textured pattern of brushstrokes which suggest the natural texture of the weathered sandstone.

As Monet was primarily interested in the effect of light on his subjects, he often painted the same scene under different lighting and atmospheric conditions. Rouen Cathedral was one of these subjects that he painted in such a series.

Examples from the Rouen Cathedral Series

When the Rouen Cathedral series was finally completed in 1895, some twenty canvases were hung together in an exhibition, showing the passage of time from dawn to dusk. The painter, Camille Pissarro, was struck by their originality and wrote to his son, "I am sorry you will not be here before Monet's exhibition closes; his Cathedrals will be scattered here and there and they should be seen as a whole." 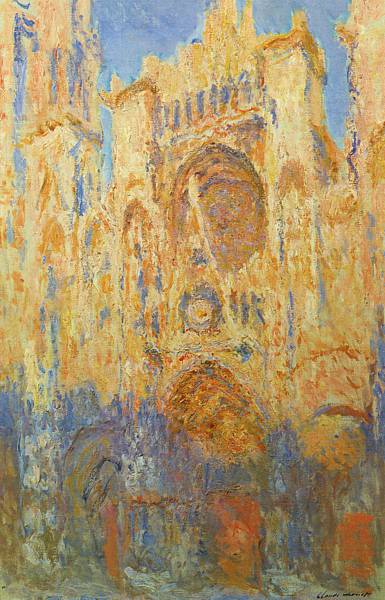