The art of Paul Cézanne was a major influence on Picasso and Braque in the development of Cubism.

Cézanne was a Post Impressionist artist. This was a vague term used to describe certain artists who were influenced by the color and vitality of Impressionism but dissatisfied with the limitations of the style.

In traditional painting, one of the techniques that artists used create the illusion of depth was to apply larger brushstrokes in the foreground of a picture, which gradually decrease in size towards the background in order to convey the distant details.

What was modern about Cézanne's painting was that he did not try to deny the two-dimensional quality of a painting's surface. Instead, he liked to emphasise the surface quality of a painting and to make it an essential element in the way we read a picture. He did this by applying regular sized strokes of paint to construct abstract patterns of color across the work. His fluid brushstrokes force the viewer to read the surface of a painting as a unified plane. He called his pictures 'constructions after nature' in which elements from the three-dimensional world were translated into patterns of color on a flat canvas.

The 'Château at Médan' is a good example of this style. It portrays the summer house of his friend, the writer Emile Zola. This is a flat, frontal view of the house which is situated on the banks of the River Seine. Cézanne's use of parallel oblong brushstrokes gives the surface a distinctly woven appearance which emphasizes its flatness. This effect is strengthened by the horizontal and vertical lines of the houses, trees and riverbank that bind the composition together. It is a three-dimensional scene which has been deliberately arranged as a flat pattern on a two-dimensional surface. Any suggestion of depth is conveyed by aerial perspective: using the natural properties of warm and cool colors to respectively advance and recede. 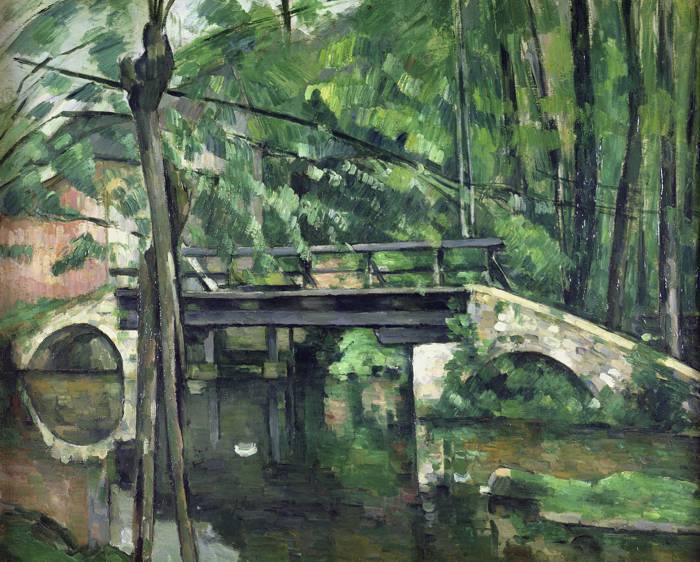