Impressionism was an art movement in France at the end of the 19th century. The Impressionists were a group of artists renowned for their innovative painting techniques and approach to using color in art.

The Impressionists were excited by contemporary developments in color theory which helped their search for a more exact analysis of the effects of color and light in nature. They abandoned the conventional idea that the shadow of an object was made up from its color with some brown or black added. Instead, they enriched their colours with the idea that the shadow of an object is broken up with dashes of its complementary color For example, in an Impressionist painting the shadow on an orange may have some strokes of blue painted into it to increase its vitality.

The Impressionists sought to capture the atmosphere of a particular time of day or the effects of different weather conditions on the landscape. In order to capture these fleeting effects they had to work quickly. They applied their paint in small brightly colored strokes which meant sacrificing much of the outline and detail of their subject. Their painting technique put them at odds with the conservative Académie of the French artistic establishment who valued subtle color and precise detail which was carefully crafted with great skill in the artist's studio. What the Académie failed to appreciate was the freshness of Impressionist color and the energy of their brushwork which revealed a spontaneity that had only previously been valued in the sketches of the old masters. However, the public grew to love the vitality of the Impressionist technique and in time Impressionism grew to become the most popular movement in the history of art.

The Impressionists further upset the Académie with their composition techniques. Traditionally, artists had created images where the lines, shapes, tones and colours were arranged in a way that led the eye to the focal point of the painting. This was the most important area of the picture and was usually situated in a central position. It was considered poor composition if the background or edges of the painting detracted from the focal point. True to form, the Impressionists broke this rule.

At this time, photography was in its early stages of development. As there was often a difference between what the photographer saw in the viewfinder of his camera and what actually appeared on the negative, photographers would crop their pictures to improve their composition. This resulted in some unusual arrangements which emphasized shapes and forms at the edge of the image. Some of Impressionists, like Degas' in his 'Four Dancers', embraced the asymmetrical effects of cropping and made it a prominent feature of their compositions.

The bold designs of Japanese woodblock prints, popular in France at the time, were another influence on the Impressionists. Their asymmetrical arrangements, contrasting large areas of flat color with patches of intricate pattern, offered a compositional format that the Impressionists could use to develop their ideas about color Sometimes, even the most avant-garde artists need the security of knowing that the path they have chosen to follow has some roots in tradition. The compositions of the Ukiyo-e masters such as Hokusai and Hiroshige offered the Impressionists this precedent of tradition, albeit from another culture, and consequently the confidence to forge ahead with their new ideas.

The Impressionists were the first group of artists to embrace painting 'en plein air' (painting outside). This was partially due to the introduction of paint in tubes which, for the first time, enabled artists to carry all their studio equipment around in a case. They also found it necessary to paint outdoors because they were committed to observing the effects of light on color in nature. Consequently landscapes, both in the town and countryside, became their most natural and influential subject and is what we immediately associate with Impressionism today.

Impressionist portraits and figure compositions with identifiable individuals were painted by Renoir, Degas and Lautrec. 'At the Moulin Rouge' is a figure composition by Lautrec which is strongly influenced by photographic cropping and the design of Japanese prints. In this revolutionary work, Lautrec includes a self portrait beside his tall cousin, Gabriel Tapié de Céléyran, as they walk away from the can-can dancer La Goulue who is seen fixing her hair. Just in front of them is a seated group that includes the entertainers La Maracona and the red-headed Jane Avril, the writer and critic Edouard Dujardin and the photographer Paul Sescau. The woman whose green lamp lit face is cropped by the edge of the picture is thought to be another dancer, May Milton.

Still Life was not hugely popular with the Impressionists, mainly because it was not a 'plein air' subject suited to capturing the atmospheric qualities of light and color. However there are a few outstanding examples such as Renoir's 'Fruit of the Midi' whose fruit and vegetables are carefully chosen to create a range of prismatic colours that span the Impressionist spectrum.

Whether in their landscapes, figure paintings or still lifes, the Impressionists celebrated and transformed the commonplace, finding beauty in misty harbour at sunrise, dignity in the labour of the common man, joy in leisure of the middle classes, and radiance in a bowl of fruit.

Impressionism and The Salon

During the 19th century, the Académie des Beaux Arts was the pillar of the French artistic establishment and it held an annual open exhibition at the Salon de Paris. The jury of the Académie saw itself as the protector of the artistic traditions of its day and upheld these by controlling the standard of paintings that were accepted into the Salon exhibitions. Any new work that challenged their standards was rejected and many of the young innovative Impressionist painters of the day frequently found themselves excluded from this mainstream exhibition.

In 1863, an alternative exhibition called the ‘Salon des Refusées’ was mounted comprising paintings and sculptures rejected by the official Salon. Ironically, ‘Les Refusées’ attracted more attention than the original exhibition and provided the ideal platform for displaying new Impressionist art to the public. However, future ‘Salon des Refusées’ did not become a regular feature and in 1874 some of the rejected artists organized an alternative exhibition in the studio of the Parisian photographer, Nadar. It was this exhibition which unearthed the name that embodied a new approach to painting. Louis Leroy, a journalist and critic for the satirical magazine 'Le Charivari', wrote a scathing review entitled ‘The Exhibition of the Impressionists’. ‘Impressionist’ was meant as a term of ridicule aimed, in particular, at Claude Monet’s painting of the misty morning harbour at Le Havre, 'Impression: Sunrise'. However, the sarcastic title appealed to both the artists and the public and the name stuck. The exhibition at Nadar's became the first of eight Impressionist exhibitions between 1874 and 1886.

Impressionism was the first movement in the canon of modern art and had a massive effect on the development of art in the 20th century. Like most revolutionary styles Impressionism was gradually absorbed into the mainstream and its limitations became frustrating to the succeeding generation. Artists such as Vincent Van Gogh, Paul Cézanne, Paul Gauguin and Georges Seurat, although steeped in the traditions of Impressionism, pushed the boundaries of the style in different creative directions and in doing so laid the foundations of art in the 20th century. For historical convenience these artists have been labeled as Post Impressionists but, apart from their Impressionist influence, they don't have much in common. Van Gogh pushed art towards Expressionism, Cézanne towards Cubism, and Gauguin and Seurat towards Fauvism and Divisionism. 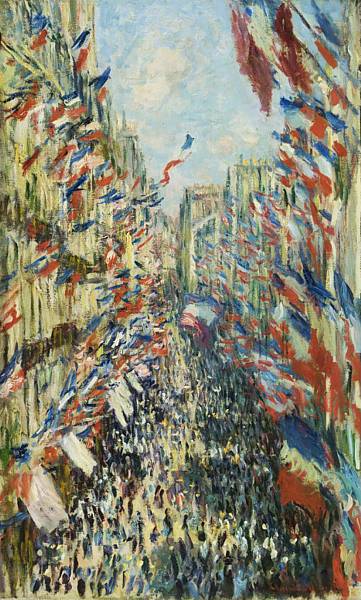