Pectoral decorations are large ornamental necklaces which are worn over the chest. These necklaces often supported a large piece of jewellery like the one in the drawing above. This image is copied from a pectoral jewel discovered in the tomb of Tutankhamun. Its design is based on the hieroglyphs from his cartouche.

A cartouche is an oval form which frames the hieroglyphs that make up the name of a God or Royal person.

It represents a looped rope which has the magical power to protect the name that is written inside it.

Cartouches were first used about 2500 BC. They were originally circular in shape, but gradually changed to an oval form with flat sides. This shape allowed a better arrangement of the hieroglyphs inside it.

On becoming king, the Pharaoh would adopt a royal name. This was called the 'prenomen'. It was often displayed along with the 'nomen' (the Pharaoh's birth name) in the form of a double cartouche.

Our example of the cartouche above is based on Tutankhamun’s 'nomen'. The three hieroglyphs at the top make up the name 'AMUN' and are placed in the most important position. The bird with two bread loaves reads 'TUT' and to its left is the symbol 'ANKH' which represents life. On the bottom row the crook which means 'ruler' is accompanied by two signs representing the city of Thebes.

Tutankhamun (c. 1352 - 1325 BC) became Pharaoh about the age of 9 and ruled until his death at 18. Little is known about him and he does not seem to have any major achievements.

However, he is one of the most famous pharaohs due to the discovery of his incredible tomb. It was found in 1922, in the Valley of the Kings at Luxor, by the British archaeologist, Howard Carter and his patron, Lord Carnarvon. In 1923, a few months after entering the tomb, Lord Carnarvon died. At the same time there was a power failure in Cairo and his dog in England also died. As a result, this gave rise to the myth of Tutankhamun's curse.

Tutankhamun's tomb was the most complete burial chamber ever found. While many other tombs had been plundered by thieves, Tutankhamun's was virtually untouched and filled with priceless treasures. 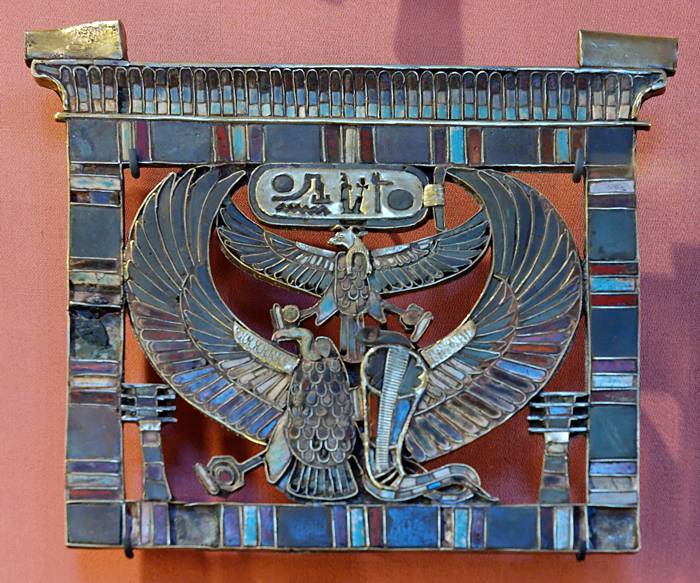 A pectoral with the cartouche of Rameses II.
Photo: © Jastrow