Willem Kalf was one of the greatest Dutch masters of a type of still life painting called 'pronkstilleven', a term that translates as 'ostentatious still life'. These still lifes displayed an array of luxurious possessions that reflected the lifestyle of the wealthy in seventeenth century Holland. Venetian glass, Chinese porcelain and Turkish carpets bedecked with ornamental gold and silverware were painted as status symbols, to be hung in the homes of the affluent patrons who commissioned them. Although only the rich could afford such rare artefacts, which were usually imported from distant lands, their inclusion in a painting could be interpreted as a patriotic tribute to the prosperity of Dutch trade. However the choice of objects was not always for spectacle alone as they sometimes carried a symbolic significance. For example, the inclusion of citrus fruits alongside wine is often read as encouraging moderation in the use of alcohol, as lemon juice was added to wine to reduce its potency and for medicinal effect.

'Still Life with Drinking Horn' is a classic Dutch still life from the Baroque period which represents the grandeur that appealed to the merchant classes in 17th century Holland. It features a vibrant red lobster, a delicacy that characterizes the opulent lifestyle of its owner. The peeled lemon that sits between its claws extends its form to create a diagonal movement across the picture which is counterbalanced by the dynamic curve of the silver-mounted drinking horn from the St. Sebastian Archers’ Guild, a militia group who formed part of the Amsterdam civic guard. This ceremonial vessel is a large buffalo horn whose silver mount portrays the martyrdom of Saint Sebastian. Legend has it that Sebastian, a Roman soldier, was executed for his Christian beliefs at the order of the emperor Diocletian. He was tied to a tree and shot full of arrows. The company of Roman archers who carried out his execution left him for dead, but he survived and was rescued by Saint Irene of Rome. Ironically, he has become the patron saint of archers. You can still see this actual horn today as it is an exhibit in the Historisch Museum in Amsterdam.

The still life is meticulously painted in a variety of sparkling colors and textures that convince the viewer of the physical reality of each object: the red sheen of the hard lobster shell, the waxy peel, spongy pith and juicy pulp of the lemon, the delicate transparency of the Venetian glass goblets, the shimmering light from the burnished silverware, the striated lines of growth on the polished horn, and the soft woven texture and pattern of the Turkish table carpet on the marble table top. All these elements are carefully balanced to lead your eye around the composition so that you savour each flavour of this visual feast.

'Still Life with a Chinese Porcelain Jar' is a typical example of Kalf's mature work which was painted in Amsterdam, where he finally settled in 1653. They all depict a collection of rare or expensive objects, usually combined with exotic foods and arranged on a tabletop against a very dark background. Kalf was also an art dealer who had easy access to many of the the 'objets d'art' that appear in his still lifes. Consequently some of these items often reappear in different works. For example, you can see the Turkish rug, silver tray and the ornamental knife in several other paintings.

'Still Life with a Chinese Porcelain Jar' is not simply a painting of luxurious objects; it is a luxurious object in itself, even more desirable than the items it depicts. Kalf painted the picture to display his skills as an artist and to demonstrate a level of craftsmanship that surpasses the quality of his subject matter.

At this time, realistic representation in art was valued as a measure of artistic quality, but Kalf pushes his image beyond mere technique. He adjusts the lighting across the painting to extract as much drama as possible from the subject. The overall light for the picture comes from the top left, but he has heightened and dampened certain areas to control the effects of texture, pattern, tone and color within the composition. He subdues the tones of the Venetian glassware (probably Dutch copies) whose transparent forms are picked out of the darkness with reflections and refractions of light. To counterbalance their delicate appearance, he intensifies the light on the Ming jar and fruit. This has the effect of heightening both their pattern and texture. The Chinese jar, which is emblazoned with a bold blue and white pattern, also subtly reflects the surrounding objects in the gloss of its glaze, while the lemon, whose waxy skin spirals down from its juicy segments, echoes the design on the jar. Throughout the composition Kalf continues to manipulate light and shade to tune the pitch of pattern and texture across the work. Twisting baroque decoration resonates through each object: the ornamental stems of the glassware, the rippling rim of the silver tray which is repeated in miniature on the lid of the little chronometer or compass, the tendrils of pattern on the porcelain jar, the hand-woven design on the the rug, the marbling on the stone table top and finally, the carefully arranged coil of lemon rind. 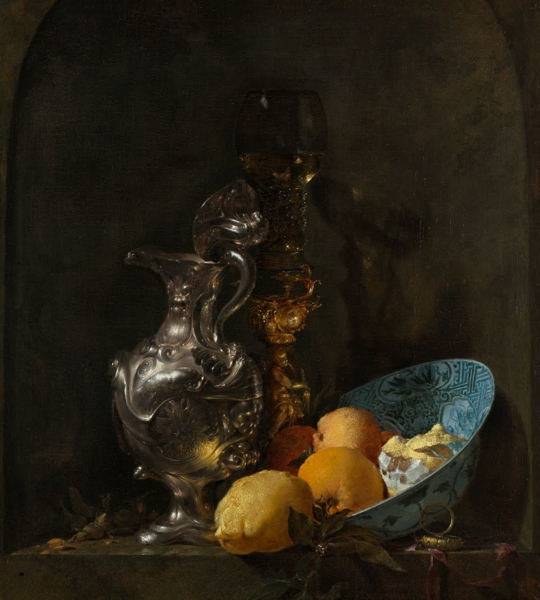